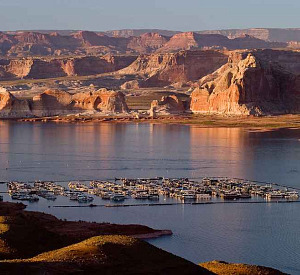 Come and visit Page Arizona boat rentals and jet skis company watercraft services.  We provide the highest quality waverunners, sea doo and PWC personal watercraft rentals on Lake Powell. Page City is in Coconino County, Arizona, United States, near the Glen Canyon Dam and Lake Powell National.  According to 2005 Census Bureau estimates, the population of the city is 6,794. Unlike other cities in the area, Page was created in 1957 to house workers and their families during the construction of nearby Glen Canyon Dam on the Colorado River. Its 17-square-mile site was obtained in a land exchange with the Navajo Indian tribe. The city is perched atop Manson Mesa at an elevation of 4,300 feet (1,300 m) above sea level and 600 feet above Lake Powell. The main revenue for the residents of Page, Arizona is the tourist attraction of Lake Powell.

After the Glen Canyon dam was completed in the 1960s, the city grew steadily to today’s population of 6,800. Because of the new roads and bridge built for use during construction, it has become the gateway to the Glen Canyon National Recreation Area and Lake Powell, attracting more than 3 million visitors per year. Page, Arizona is also the home of two of the largest electrical generation units in the western United States. Glen Canyon Dam has a 1,288,000 kilowatts capacity when fully online. The other power plant to the southeast is the Navajo Generating Station, a coal-fired steam plant with an output capability of 2,250,000 kilowatts. Major marinas near Page is Wahweap Marina, Antelope Point Marina, and State Line Launch Ramp and Dock.

Please call or e-mail to ask questions or make

reservations. Representatives are available from

Yamaha jet skis on the market. Try out our new